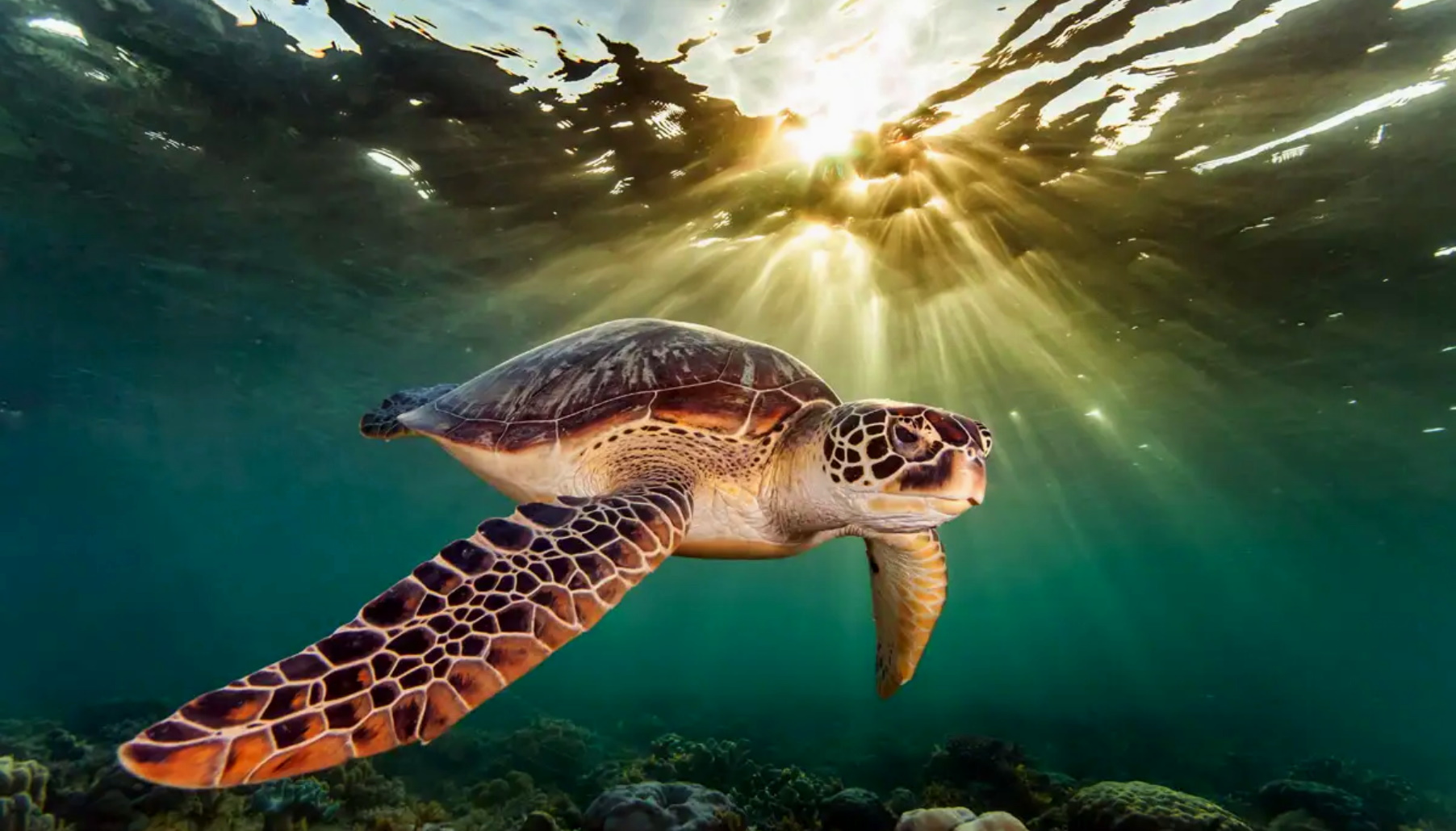 Turtles are cute, green little creatures that are often portrayed in pop culture as adorable animals. If you have tried having a pet turtle when you were young then you know they are very fun and sneaky pets. Sometimes if you let them wander around they could disappear without you noticing. Turtles are reptiles easily distinguished by their hard shells that protect them from predators. There are different types of turtles and they live all over the world in almost every type of climate. Some live in fresh-water, some are sea-dwelling, and some have found homes in our humble houses.

The Turtle – Poem by Ogden Nash

The turtle lives ‘twixt plated decks
Which practically conceal its sex.
I think it clever of the turtle
In such a fix to be so fertile.

The Phoenix And The Turtle – Poem by William Shakespeare

Let the bird of loudest lay,
On the sole Arabian tree,
Herald sad and trumpet be,
To whose sound chaste wings obey.
But thou, shrieking harbinger,
Foul pre-currer of the fiend,
Augur of the fever’s end,
To this troop come thou not near.
From this session interdict
Every fowl of tyrant wing,
Save the eagle, feather’d king:
Keep the obsequy so strict.
Let the priest in surplice white,
That defunctive music can,
Be the death-divining swan,
Lest the requiem lack his right.
And thou, treble-dated crow,
That thy sable gender mak’st
With the breath thou giv’st and tak’st,
‘Mongst our mourners shalt thou go.
Here the anthem doth commence:
Love and constancy is dead;
Phoenix and the turtle fled
In a mutual flame from hence.
So they lov’d, as love in twain
Had the essence but in one;
Two distincts, division none:
Number there in love was slain.
Hearts remote, yet not asunder;
Distance, and no space was seen
‘Twixt the turtle and his queen;
But in them it were a wonder.
So between them love did shine,
That the turtle saw his right
Flaming in the phoenix’ sight:
Either was the other’s mine.
Property was thus appall’d,
That the self was not the same;
Single nature’s double name
Neither two nor one was call’d.
Reason, in itself confounded,
Saw division grow together;
To themselves yet either-neither,
Simple were so well compounded.
That it cried how true a twain
Seemeth this concordant one!
Love hath reason, reason none
If what parts can so remain.
Whereupon it made this threne
To the phoenix and the dove,
Co-supreme and stars of love;
As chorus to their tragic scene.
THRENOS.
Beauty, truth, and rarity.
Grace in all simplicity,
Here enclos’d in cinders lie.
Death is now the phoenix’ nest;
And the turtle’s loyal breast
To eternity doth rest,
Leaving no posterity:-
‘Twas not their infirmity,
It was married chastity.
Truth may seem, but cannot be:
Beauty brag, but ’tis not she;
Truth and beauty buried be.
To this urn let those repair
That are either true or fair;
For these dead birds sigh a prayer.

Because the road to our house
is a back road, meadowlands punctuated
by gravel quarry and lumberyard,
there are unexpected travelers
some nights on our way home from work.
Once, on the lawn of the Tool
and Die Company, a swan;
the word doesn’t convey the shock
of the thing, white architecture
rippling like a pond’s rain-pocked skin,
beak lifting to hiss at my approach.
Magisterial, set down in elegant authority,
he let us know exactly how close we might come.
After a week of long rains
that filled the marsh until it poured
across the road to make in low woods
a new heaven for toads,
a snapping turtle lumbered down the center
of the asphalt like an ambulatory helmet.
His long tail dragged, blunt head jutting out
of the lapidary prehistoric sleep of shell.
We’d have lifted him from the road
but thought he might bend his long neck back
to snap. I tried herding him; he rushed,
though we didn’t think those blocky legs
could hurry– then ambled back
to the center of the road, a target
for kids who’d delight in the crush
of something slow with the look
of primeval invulnerability. He turned
the blunt spear point of his jaws,
puffing his undermouth like a bullfrog,
and snapped at your shoe,
vising a beakful of– thank God–
leather. You had to shake him loose. We left him
to his own devices, talked on the way home
of what must lead him to new marsh
or old home ground. The next day you saw,
one town over, remains of shell
in front of the little liquor store. I argued
it was too far from where we’d seen him,
too small to be his… though who could tell
what the day’s heat might have taken
from his body. For days he became a stain,
a blotch that could have been merely
oil. I did not want to believe that
was what we saw alive in the firm center
of his authority and right
to walk the center of the road,
head up like a missionary moving certainly
into the country of his hopes.
In the movies in this small town
I stopped for popcorn while you went ahead
to claim seats. When I entered the cool dark
I saw straight couples everywhere,
no single silhouette who might be you.
I walked those two aisles too small
to lose anyone and thought of a book
I read in seventh grade, “Stranger Than Science,”
in which a man simply walked away,
at a picnic, and was,
in the act of striding forward
to examine a flower, gone.
By the time the previews ended
I was nearly in tears– then realized
the head of one-half the couple in the first row
was only your leather jacket propped in the seat
that would be mine. I don’t think I remember
anything of the first half of the movie.
I don’t know what happened to the swan. I read
every week of some man’s lover showing
the first symptoms, the night sweat
or casual flu, and then the wasting begins
and the disappearance a day at a time.
I don’t know what happened to the swan;
I don’t know if the stain on the street
was our turtle or some other. I don’t know
where these things we meet and know briefly,
as well as we can or they will let us,
go. I only know that I do not want you
–you with your white and muscular wings
that rise and ripple beneath or above me,
your magnificent neck, eyes the deep mottled autumnal colors
of polished tortoise– I do not want you ever to die.

The Turtle Shrine Near Chittagong – Poem by Naomi Shihab Nye

Humps of shell emerge from dark water.
Believers toss hunks of bread,
hoping the fat reptilian heads
will loom forth from the murk
and eat. Meaning: you have been
heard.
I stood, breathing the stench of mud
and rotten dough, and could not feel
encouraged. Climbed the pilgrim hill
where prayers in tissue radiant tubes
were looped to a tree. Caught in
their light, a hope washed over me
small as the hope of stumbling feet
but did not hold long enough
to get me down.
Rickshas crowded the field,
announced by tinny bells.
The friend beside me, whose bread
floated and bobbed,
grew grim. They’re full, I told him.
But they always eat mine.
That night I told the man I love most
he came from hell. It was also
his birthday. We gulped lobster
over a white tablecloth in a country
where waves erase whole villages, annually,
and don’t even make our front page.
Waiters forded the lulling currents
of heat. Later, my mosquito net
had holes.
All night, I was pitching something,
crumbs or crusts, into that bottomless pool
where the spaces between our worlds take root.
He would forgive me tomorrow.
But I wanted a mouth to rise up
from the dark, a hand,
any declarable body part, to swallow
or say, This is water, that is land.