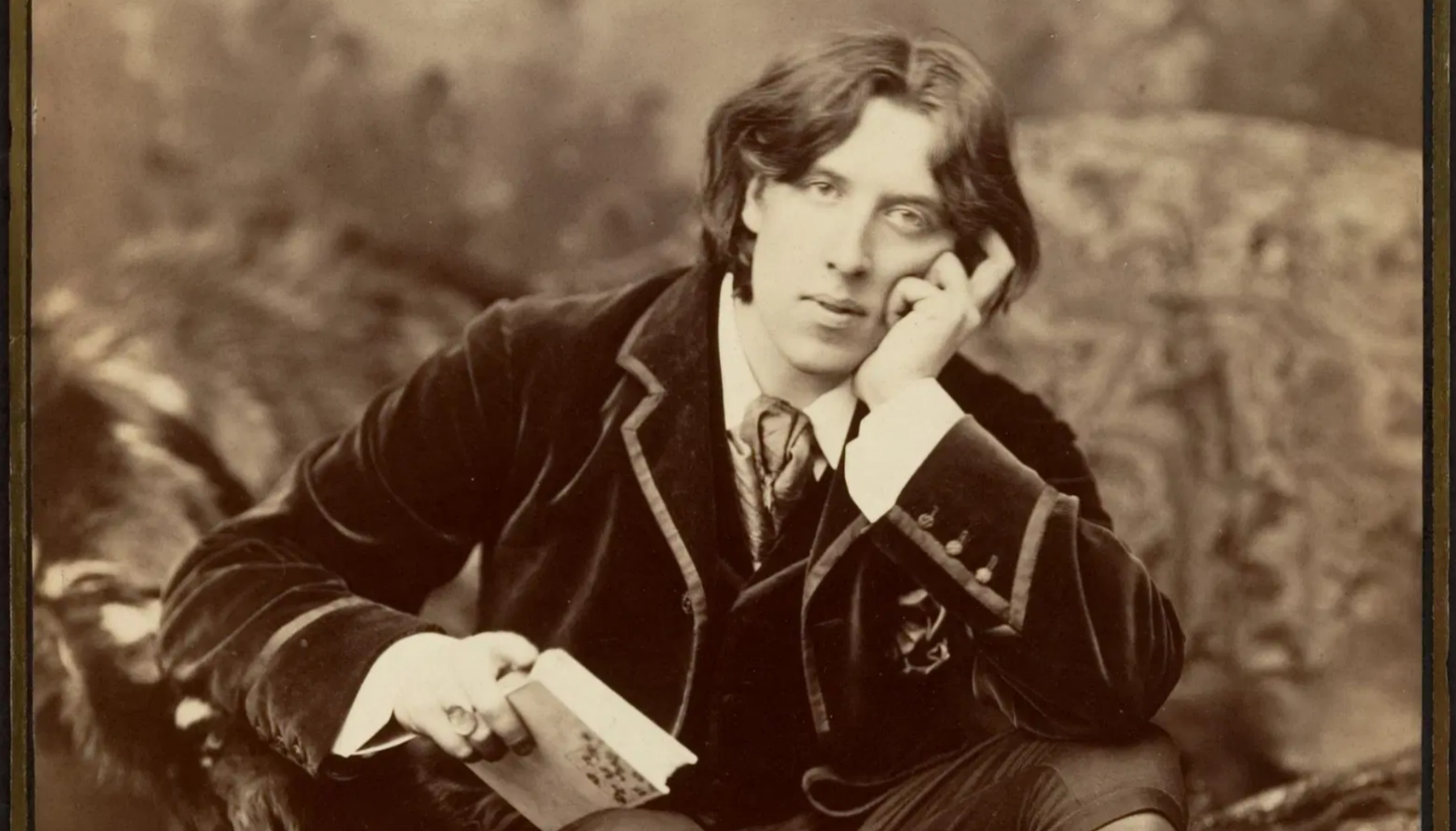 ~
THE wild bee reels from bough to bough
With his furry coat and his gauzy wing.
Now in a lily-cup, and now
Setting a jacinth bell a-swing,
In his wandering;
Sit closer love: it was here I trow
I made that vow,
Swore that two lives should be like one
As long as the sea-gull loved the sea,
As long as the sunflower sought the sun,–
It shall be, I said, for eternity
‘Twixt you and me!
Dear friend, those times are over and done,
Love’s web is spun.
Look upward where the poplar trees
Sway and sway in the summer air,
Here in the valley never a breeze
Scatters the thistledown, but there
Great winds blow fair
From the mighty murmuring mystical seas,
And the wave-lashed leas.
Look upward where the white gull screams,
What does it see that we do not see?
Is that a star? or the lamp that gleams
On some outward voyaging argosy,–
Ah! can it be
We have lived our lives in a land of dreams!
How sad it seems.
Sweet, there is nothing left to say
But this, that love is never lost,
Keen winter stabs the breasts of May
Whose crimson roses burst his frost,
Ships tempest-tossed
Will find a harbour in some bay,
And so we may.
And there is nothing left to do
But to kiss once again, and part,
Nay, there is nothing we should rue,
I have my beauty,–you your Art,
Nay, do not start,
One world was not enough for two
Like me and you.

Flower Of Love
by Oscar Wilde

~
Sweet, I blame you not, for mine the fault was, had I not been made of common
clay
I had climbed the higher heights unclimbed yet, seen the fuller air, the
larger day.
From the wildness of my wasted passion I had struck a better, clearer song,
Lit some lighter light of freer freedom, battled with some Hydra-headed wrong.
Had my lips been smitten into music by the kisses that but made them bleed,
You had walked with Bice and the angels on that verdant and enamelled meed.
I had trod the road which Dante treading saw the suns of seven circles shine,
Ay! perchance had seen the heavens opening, as they opened to the Florentine.
And the mighty nations would have crowned me, who am crownless now and without
name,
And some orient dawn had found me kneeling on the threshold of the House of
Fame.
I had sat within that marble circle where the oldest bard is as the young,
And the pipe is ever dropping honey, and the lyre’s strings are ever strung.
Keats had lifted up his hymeneal curls from out the poppy-seeded wine,
With ambrosial mouth had kissed my forehead, clasped the hand of noble love in
mine.
And at springtide, when the apple-blossoms brush the burnished bosom of the
dove,
Two young lovers lying in an orchard would have read the story of our love;
Would have read the legend of my passion, known the bitter secret of my heart,
Kissed as we have kissed, but never parted as we two are fated now to part.
For the crimson flower of our life is eaten by the cankerworm of truth,
And no hand can gather up the fallen withered petals of the rose of youth.
Yet I am not sorry that I loved you -ah! what else had I a boy to do? –
For the hungry teeth of time devour, and the silent-footed years pursue.
Rudderless, we drift athwart a tempest, and when once the storm of youth is
past,
Without lyre, without lute or chorus, Death the silent pilot comes at last.
And within the grave there is no pleasure, for the blindworm battens on the
root,
And Desire shudders into ashes, and the tree of Passion bears no fruit.
Ah! what else had I to do but love you? God’s own mother was less dear to me,
And less dear the Cytheraean rising like an argent lily from the sea.
I have made my choice, have lived my poems, and, though youth is gone in
wasted days,
I have found the lover’s crown of myrtle better than the poet’s crown of bays.

A Vision
by Oscar Wilde

~
Two crowned Kings, and One that stood alone
With no green weight of laurels round his head,
But with sad eyes as one uncomforted,
And wearied with man’s never-ceasing moan
For sins no bleating victim can atone,
And sweet long lips with tears and kisses fed.
Girt was he in a garment black and red,
And at his feet I marked a broken stone
Which sent up lilies, dove-like, to his knees.
Now at their sight, my heart being lit with flame,
I cried to Beatrice, ‘Who are these? ‘
And she made answer, knowing well each name,
‘AEschylos first, the second Sophokles,
And last (wide stream of tears!) Euripides.’

~
OFT have we trod the vales of Castaly
And heard sweet notes of sylvan music blown
From antique reeds to common folk unknown:
And often launched our bark upon that sea
Which the nine Muses hold in empery,
And ploughed free furrows through the wave and foam,
Nor spread reluctant sail for more safe home
Till we had freighted well our argosy.
Of which despoilèd treasures these remain,
Sordello’s passion, and the honied line
Of young Endymion, lordly Tamburlaine
Driving his pampered jades, and more than these,
The seven-fold vision of the Florentine,
And grave-browed Milton’s solemn harmonies.#

~
WAS this His coming! I had hoped to see
A scene of wondrous glory, as was told
Of some great God who in a rain of gold
Broke open bars and fell on Danae:
Or a dread vision as when Semele
Sickening for love and unappeased desire
Prayed to see God’s clear body, and the fire
Caught her white limbs and slew her utterly:
With such glad dreams I sought this holy place,
And now with wondering eyes and heart I stand
Before this supreme mystery of Love:
A kneeling girl with passionless pale face,
An angel with a lily in his hand,
And over both with outstretched wings the Dove.

~
IS it thy will that I should wax and wane,
Barter my cloth of gold for hodden grey,
And at thy pleasure weave that web of pain
Whose brightest threads are each a wasted day?
Is it thy will–Love that I love so well–
That my Soul’s House should be a tortured spot
Wherein, like evil paramours, must dwell
The quenchless flame, the worm that dieth not?
Nay, if it be thy will I shall endure,
And sell ambition at the common mart,
And let dull failure be my vestiture,
And sorrow dig its grave within my heart.
Perchance it may be better so–at least
I have not made my heart a heart of stone,
Nor starved my boyhood of its goodly feast,
Nor walked where Beauty is a thing unknown.
Many a man hath done so; sought to fence
In straitened bonds the soul that should be free,
Trodden the dusty road of common sense,
While all the forest sang of liberty,
Not marking how the spotted hawk in flight
Passed on wide pinion through the lofty air,
To where the steep untrodden mountain height
Caught the last tresses of the Sun God’s hair.
Or how the little flower he trod upon,
The daisy, that white-feathered shield of gold,
Followed with wistful eyes the wandering sun
Content if once its leaves were aureoled.
But surely it is something to have been
The best belovèd for a little while,
To have walked hand in hand with Love, and seen
His purple wings flit once across thy smile.
Ay! though the gorgèd asp of passion feed
On my boy’s heart, yet have I burst the bars,
Stood face to face with Beauty, known indeed
The Love which moves the Sun and all the stars!