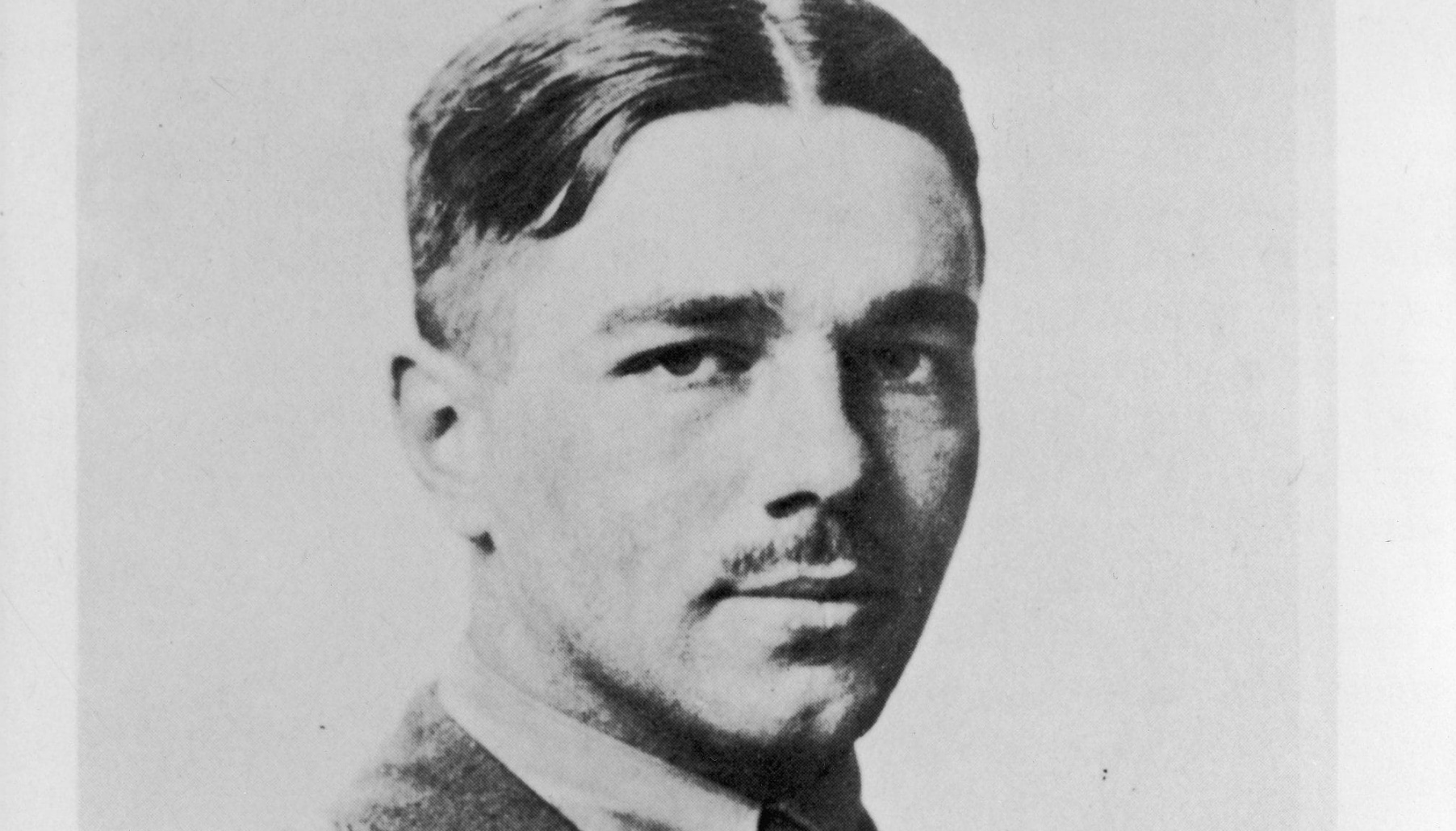 Bent double, like old beggars under sacks,
Knock-kneed, coughing like hags, we cursed through sludge,
Till on the haunting flares we turned out backs,
And towards our distant rest began to trudge.
Men marched asleep. Many had lost their boots,
But limped on, blood-shod. All went lame, all blind;
Drunk with fatigue; deaf even to the hoots
Of gas-shells dropping softly behind.
Gas! GAS! Quick, boys! – An ecstasy of fumbling
Fitting the clumsy helmets just in time,
But someone still was yelling out and stumbling
And flound’ring like a man in fire or lime.-
Dim through the misty panes and thick green light,
As under a green sea, I saw him drowning.
In all my dreams before my helpless sight
He plunges at me, guttering, choking, drowning.
If in some smothering dreams, you too could pace
Behind the wagon that we flung him in,
And watch the white eyes writhing in his face,
His hanging face, like a devil’s sick of sin,
If you could hear, at every jolt, the blood
Come gargling from the froth-corrupted lungs
Obscene as cancer, bitter as the cud
Of vile, incurable sores on innocent tongues,-
My friend, you would not tell with such high zest
To children ardent for some desperate glory,
The old Lie: Dulce et decorum est
Pro patria mori.

~
What passing-bells for these who die as cattle?
Only the monstrous anger of the guns.
Only the stuttering rifles’ rapid rattle
Can patter out their hasty orisons.
No mockeries now for them; no prayers nor bells;
Nor any voice of mourning save the choirs,
The shrill, demented choirs of wailing shells;
And bugles calling for them from sad shires.
What candles may be held to speed them all?
Not in the hands of boys, but in their eyes
Shall shine the holy glimmers of good-byes.
The pallor of girls’ brows shall be their pall;
Their flowers the tenderness of patient minds,
And each slow dusk a drawing-down of blinds.

~
He sat in a wheeled chair, waiting for dark,
And shivered in his ghastly suit of grey,
Legless, sewn short at elbow. Through the park
Voices of boys rang saddening like a hymn,
Voices of play and pleasure after day,
Till gathering sleep had mothered them from him.
About this time Town used to swing so gay
When glow-lamps budded in the light blue trees,
And girls glanced lovelier as the air grew dim,-
In the old times, before he threw away his knees.
Now he will never feel again how slim
Girls’ waists are, or how warm their subtle hands.
All of them touch him like some queer disease.
There was an artist silly for his face,
For it was younger than his youth, last year.
Now, he is old; his back will never brace;
He’s lost his colour very far from here,
Poured it down shell-holes till the veins ran dry,
And half his lifetime lapsed in the hot race
And leap of purple spurted from his thigh.
One time he liked a blood-smear down his leg,
After the matches, carried shoulder-high.
It was after football, when he’d drunk a peg,
He thought he’d better join. – He wonders why.
Someone had said he’d look a god in kilts,
That’s why; and maybe, too, to please his Meg,
Aye, that was it, to please the giddy jilts
He asked to join. He didn’t have to beg;
Smiling they wrote his lie: aged nineteen years.
Germans he scarcely thought of; all their guilt,
And Austria’s, did not move him. And no fears
Of Fear came yet. He thought of jewelled hilts
For daggers in plaid socks; of smart salutes;
And care of arms; and leave; and pay arrears;
Esprit de corps; and hints for young recruits.
And soon, he was drafted out with drums and cheers.
Some cheered him home, but not as crowds cheer Goal.
Only a solemn man who brought him fruits
Thanked him; and then enquired about his soul.
Now, he will spend a few sick years in institutes,
And do what things the rules consider wise,
And take whatever pity they may dole.
Tonight he noticed how the women’s eyes
Passed from him to the strong men that were whole.
How cold and late it is! Why don’t they come
And put him into bed? Why don’t they come?

~
War broke: and now the Winter of the world
With perishing great darkness closes in.
The foul tornado, centred at Berlin,
Is over all the width of Europe whirled,
Rending the sails of progress. Rent or furled
Are all Art’s ensigns. Verse wails. Now begin
Famines of thought and feeling. Love’s wine’s thin.
The grain of human Autumn rots, down-hurled.
For after Spring had bloomed in early Greece,
And Summer blazed her glory out with Rome,
An Autumn softly fell, a harvest home,
A slow grand age, and rich with all increase.
But now, for us, wild Winter, and the need
Of sowings for new Spring, and blood for seed.

~
Under his helmet, up against his pack,
After so many days of work and waking,
Sleep took him by the brow and laid him back.
There, in the happy no-time of his sleeping,
Death took him by the heart. There heaved a quaking
Of the aborted life within him leaping,
Then chest and sleepy arms once more fell slack.
And soon the slow, stray blood came creeping
From the intruding lead, like ants on track.
Whether his deeper sleep lie shaded by the shaking
Of great wings, and the thoughts that hung the stars,
High-pillowed on calm pillows of God’s making,
Above these clouds, these rains, these sleets of lead,
And these winds’ scimitars,
-Or whether yet his thin and sodden head
Confuses more and more with the low mould,
His hair being one with the grey grass
Of finished fields, and wire-scrags rusty-old,
Who knows? Who hopes? Who troubles? Let it pass!
He sleeps. He sleeps less tremulous, less cold,
Than we who wake, and waking say Alas!

~
War’s a joke for me and you,
Wile we know such dreams are true.
– Siegfried Sassoon
Out there, we’ve walked quite friendly up to Death,-
Sat down and eaten with him, cool and bland,-
Pardoned his spilling mess-tins in our hand.
We’ve sniffed the green thick odour of his breath,-
Our eyes wept, but our courage didn’t writhe.
He’s spat at us with bullets and he’s coughed
Shrapnel. We chorussed when he sang aloft,
We whistled while he shaved us with his scythe.
Oh, Death was never enemy of ours!
We laughed at him, we leagued with him, old chum.
No soldier’s paid to kick against His powers.
We laughed, -knowing that better men would come,
And greater wars: when each proud fighter brags
He wars on Death, for lives; not men, for flags.