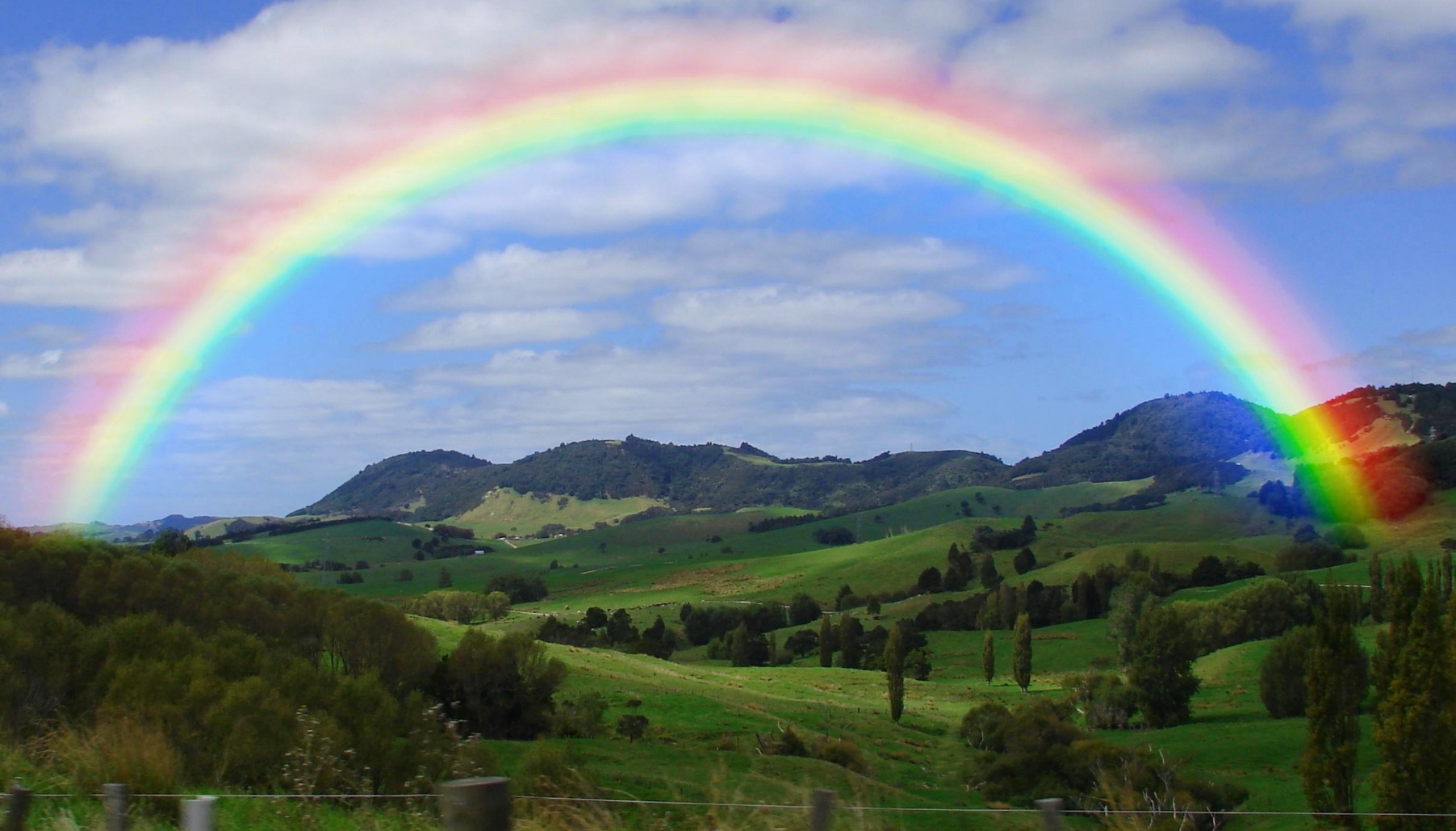 Over The Rainbow
by Sulaiman Mohd Yusof

~
The morning rays of the Sun cling
On the upper bow of the Rainbow
Emerge after a moment ‘s dusk
Brown Pelicans and Western Gulls
Fly beneath the lower bow
That touches the water
Send fishes into hiding
As I walk along the white beach
Looking at the sea, the blue waters
Dance its way towards the golden sand
Shy away from the smiling horizon
Once, in a jubilant second, vessels across,
Scream their hearts out,
Ignite the nature’s garland
The Princess of the Sea,
Colorful as Galaxies dust
Catches watchful eyes off-guard
The seven colors spectrum is the senses
Nourishes the need and desire
Like a prism, it passes through every heart
Leaving the lights of absolution
Windward and crystallize
Red, orange, yellow
Life and love bestows
Green, blue, indigo
Ships of love embargo
Engaged for passion
Violet
Rhymes like couplet
One kiss,
Over the rainbow
Breaches the distance
Between friendship
And love

Rainbow – Dancing With The Wind
by TaMaRa HaNaRiNg

~
Amazing lady you..
like you has never been..
like him has never seen..
and no one will know,
At night at the sea..
when there you will be..
in the wind you and who,
you will dance with the wind
when the start never end
with the waves both flow,
dropp me back to the rain
keep with you the Love’s chain
then back me to the bow,
the amazing one are you…
water me and the buds.
teach the buds how to grow,
Your words like the touch,
your touch like the dew,
Keep on singing every day
toward you open the way
then the feeling let it glow,
keep on raising rate of beats
then the raising keep slow..
BROKEN HEARTS I TREAT..
n your breathing let me live
let me come, let me go..
let the sadness..me to blow,
how the chance became dance..
how the arts of the parts
let me see and you show..
God CREATION God draw,
words from the heart
from the feeling i will sew..
………………………………
The wondrous one are you…….

~
The word goes round Repins,
the murmur goes round Lorenzinis,
at Tattersalls, men look up from sheets of numbers,
the Stock Exchange scribblers forget the chalk in their hands
and men with bread in their pockets leave the Greek Club:
There’s a fellow crying in Martin Place. They can’t stop him.
The traffic in George Street is banked up for half a mile
and drained of motion. The crowds are edgy with talk
and more crowds come hurrying. Many run in the back streets
which minutes ago were busy main streets, pointing:
There’s a fellow weeping down there. No one can stop him.
The man we surround, the man no one approaches
simply weeps, and does not cover it, weeps
not like a child, not like the wind, like a man
and does not declaim it, nor beat his breast, nor even
sob very loudly – yet the dignity of his weeping
holds us back from his space, the hollow he makes about him
in the midday light, in his pentagram of sorrow,
and uniforms back in the crowd who tried to seize him
stare out at him, and feel, with amazement, their minds
longing for tears as children for a rainbow.
Some will say, in the years to come, a halo
or force stood around him. There is no such thing.
Some will say they were shocked and would have stopped him
but they will not have been there. The fiercest manhood,
the toughest reserve, the slickest wit amongst us
trembles with silence, and burns with unexpected
judgements of peace. Some in the concourse scream
who thought themselves happy. Only the smallest children
and such as look out of Paradise come near him
and sit at his feet, with dogs and dusty pigeons.
Ridiculous, says a man near me, and stops
his mouth with his hands, as if it uttered vomit –
and I see a woman, shining, stretch her hand
and shake as she receives the gift of weeping;
as many as follow her also receive it
and many weep for sheer acceptance, and more
refuse to weep for fear of all acceptance,
but the weeping man, like the earth, requires nothing,
the man who weeps ignores us, and cries out
of his writhen face and ordinary body
not words, but grief, not messages, but sorrow,
hard as the earth, sheer, present as the sea –
and when he stops, he simply walks between us
mopping his face with the dignity of one
man who has wept, and now has finished weeping.
Evading believers, he hurries off down Pitt Street.

Claiming The Rainbow
by Mary Havran

~
It was childhood enchantment in the form of song
Which first awoke in me, the rainbow-lover
Entranced as ‘Dorothy’ sang of
Her wish to someday fly far over
She not understanding, as I now do,
That rainbows only exist from a limited point of view
(Or perhaps she might have chosen instead to hover)
Now so many sects of people
Seem resolute on claiming the rainbow
Exclusively for their separate cause to use
Some with reverent sighs, claming the rainbow as sign
Of solemn promise their God once set against the sky
While the gaiety of the rainbow hues
Are proudly waived as flag by some alternate crews
(Which fundamentalists rarely welcome as good news)
Some declare the rainbow an emblem of diversity
Yet should you query those at the University
Mere prismatic refraction of sunlight creates these views
Is the Rainbow simply a natural phenomenon?
Or somehow innately related to karma?
By what reason does it inspire such melodrama?
Having not the least desire to argue
I will never debate with others, or with you,
Regarding claiming as one’s due, the rainbow in the sky
(Nor be persuaded by any proffered reason why)
One can create manmade rainbows in any zone
Though I much prefer to view
Those transient arches occasioning the sky
Each rainbow offers beauty of its own
A fleeting apparition which light alone
By transecting water droplets can supply
The rainbow’s color array is far from random
Displaying the light spectrum in proper tandem
And many an artist’s pallet draws therefrom
There is pleasing perfection in this order
Something nothing else in nature seems to border
Individual elements of lightwaves briefly unbound
That’s all the rainbow really ever needs to be
So in appreciating each and every one I see,
Henceforth the one properly claiming the rainbow – will be me.

Children Of The Rainbow
by C.J. Heck

~
I talked to Grammy yesterday
about a girl I know.
Her skin’s a different color
but I like her, even though
the other children tease her
and it makes her run away
because she looks so different
and they never let her play.
I think she looks just beautiful!
Her skin is chocolate brown.
She’s the nicest girl I’ve ever met
and it’s sad to see her frown.
Grammy held me on her lap
and told me she was proud.
She said that’s what’s important
and then my gram allowed
that children are life’s rainbow,
black and yellow, red and white,
but the colors aren’t what matter,
it’s what’s down deep inside.
I asked her if that’s what it means
when we say we’re colorblind.
She smiled and said it should mean that
in all hearts and in all minds.

The Rainbow
by C.J. Heck

~
Today I saw a rainbow
with bright colors in the sky.
I couldn’t see its start or end,
just its middle, way up high.
Mom said that it’s God’s promise,
that the world will still go on,
and He always will forgive us
though sometimes we do wrong.
I guess I understand it
and I’m glad He thinks that way.
I just wish He’d paint His rainbows
up there every single day.
Gee, Great Grampa was an artist.
We have his paintings everywhere.
He died a long, long time ago.
Is he helping God up there?
That rainbow sure was pretty
and they mostly look the same,
but Great Grampa should tell God…
He should always sign His name.